The library staff are ready and eager to help you find the information you need. Good information literacy skills are crucial to academic success and we will teach you how to find information, how to analyze it, and how to apply that information.

History of the Library

In 1970,Derrell C. Roberts became the second president of the three-year-old institution. Throughout his tenure at Dalton State College, Dr. Roberts supported broad educational opportunities for all citizens of North Georgia.

Under his leadership, student enrollment tripled, reaching almost 3,000 in 1993. The size of the faculty doubled from 47 to 93 members. The college library's 131,000 volumes and other holdings placed the institution at the top of the list of two-year college libraries in the University System of Georgia.

At the time of Dr. Roberts' retirement, Dr. Wayne Bell, a colleague for 22 years, described those years by stating,

Dr. Roberts' presidency was enlivened by a gentle wit and scholarly intellect, energized by a personal concern for the welfare of each member of the college community, and guided by an unerring commitment to the highest standards of professional integrity and academic quality.

He served until his retirement in 1994, and became President Emeritus in 1994. 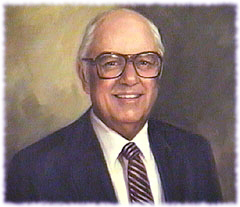