From his observation of children, Piaget understood that children were creating ideas. They were not limited to receiving knowledge from parents or teachers; they actively constructed their own knowledge. Piaget's work provides the foundation on which constructionist theories are based. Constructionists believe that knowledge is constructed and learning occurs when children create products or artifacts. They assert that learners are more likely to be engaged in learning when these artifacts are personally relevant and meaningful (Constructivism, n.d.).

In studying the cognitive development of children and adolescents, Piaget identified four major stages: sensorimotor, preoperational, concrete operational and formal operational (Figure 2.1). Piaget believed all children pass through these phases to advance to the next level of cognitive development. In each stage, children demonstrate new intellectual abilities and increasingly complex understanding of the world. Stages cannot be "skipped;" intellectual development always follows this sequence. The ages at which children progress through the stages are averages-they vary with the environment and background of individual children. At any given time, a child may exhibit behaviors characteristic of more than one stage.

The first stage, sensorimotor, begins at birth and lasts until 18 months-2 years of age. This stage involves the use of motor activity without the use of symbols. Knowledge is limited in this stage, because it is based on physical interactions and experiences. Infants cannot predict reaction, and therefore must constantly experiment and learn through trial and error. Such exploration might include shaking a rattle or putting objects in the mouth. As they become more mobile, infants' ability to develop cognitively increases. Early language development begins during this stage. Object permanence occurs at 7-9 months, demonstrating that memory is developing. Infants realize that an object exists after it can no longer be seen.

The preoperational stage usually occurs during the period between toddlerhood (18-24months) and early childhood (7 years). During this stage children begin to use language; memory and imagination also develop. In the preoperational stage, children engage in make believe and can understand and express relationships between the past and the future. More complex concepts, such as cause and effect relationships, have not been learned. Intelligence is egocentric and intuitive, not logical.

The concrete operational stage typically develops between the ages of 7-11 years. Intellectual development in this stage is demonstrated through the use of logical and systematic manipulation of symbols, which are related to concrete objects. Thinking becomes less egocentric with increased awareness of external events, and involves concrete references.

The period from adolescence through adulthood is the formal operational stage. Adolescents and adults use symbols related to abstract concepts. Adolescents can think about multiple variables in systematic ways, can formulate hypotheses, and think about abstract relationships and concepts.

Researchers during the 1960's and 1970's identified shortcomings in Piaget's theory. First, critics argue that by describing tasks with confusing abstract terms and using overly difficult tasks, Piaget under estimated children's abilities. Researchers have found that young children can succeed on simpler forms of tasks requiring the same skills. Second, Piaget's theory predicts that thinking within a particular stage would be similar across tasks. In other words, preschool children should perform at the preoperational level in all cognitive tasks. Research has shown diversity in children's thinking across cognitive tasks. Third, according to Piaget, efforts to teach children developmentally advanced concepts would be unsuccessful. Researchers have found that in some instances, children often learn more advanced concepts with relatively brief instruction. Researchers now believe that children may be more competent than Piaget originally thought, especially in their practical knowledge. See below the illustration (the animation was created by Daurice Grossniklaus and Bob Rodes, 2002; the images below were created based on the video "Illustration of Schema, Assimilation, & Accommodation" by Department of Educational Psychology and Instructional Technology University of Georgia, 2012), which demonstrates a child developing a schema for a dog (Figure 2.2) by assimilating information about the dog (Figure 2.3). The child then sees a cat, using accommodation, and compares existing knowledge of a dog to form a schema of a cat (Figure 2.4). 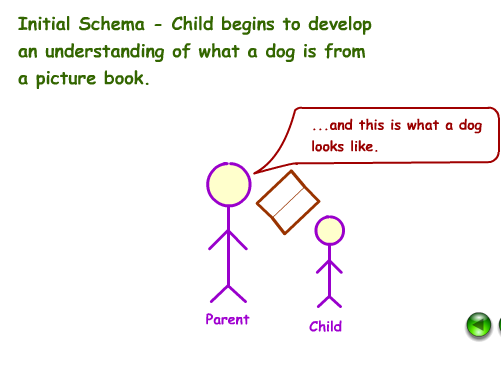 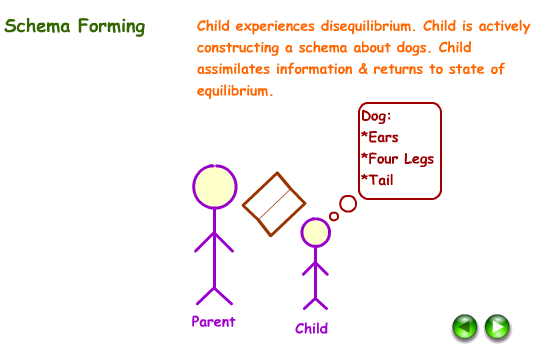 In Figure 2.4. the process of accommodation occurs when the child sees a cat in the park. A new schema must be formed, because the cat has many traits of the dog, but because the cat meows and then climbs a tree the child begins to actively construct new meaning. Again, the parent reinforces that this is a cat to resolve the child's disequilibria. A new schema about cats is then formed and the child returns to a state of equilibrium.

An important implication of Piaget's theory is adaptation of instruction to the learner's developmental level. The content of instruction needs to be consistent with the developmental level of the learner. The teacher's role is to facilitate learning by providing a variety of experiences. "Discovery Learning" provides opportunities for learners to explore and experiment, thereby encouraging new understandings (Kafia & Resnick, 1996). Opportunities that allow students of differing cognitive levels to work together often encourage less mature students to advance to a more mature understanding. One further implication for instruction is the use of concrete "hands on" experiences to help children learn. Additional suggestions include:

Huitt and Hummel (1998) asserted that only 35% of high school graduates in industrialized countries obtain formal operations and many people do not think formally during adulthood. This is significant in terms of developing instruction and performance support tools for students who are chronologically adults, but may be limited in their understanding of abstract concepts. For both adolescent and adult learners, it is important to use these instructional strategies: