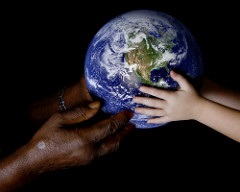 This guide seeks to be nonpartisan and focuses on student safety, wellbeing, and social justice.

Thanks to Heidi Johnson at the UNLV Libraries and her permission to borrow her work.

The use of sensitive and inclusive language - and the terms associated with discourse about social justice - can help facilitate dialog about issues that are more difficult for people to understand if they have never examined their own power, privilege, and oppression. Here are some useful definitions to help guide you in facilitating those discussions.

Activist/Activism: "Activism is quite simply taking action to effect social change; this can occur in a myriad of ways and in a variety of forms. Often it is concerned with ‘how to change the world’ through social, political, economic or environmental change. This can be led by individuals but is often done collectively through social movements." (Permanent Culture Now)

Ally: "Someone who makes the commitment and effort to recognize their privilege (based on gender, class, race, sexual identity, etc.) and work in solidarity with oppressed groups in the struggle for justice. Allies understand that it is in their own interest to end all forms of oppression, even those from which they may benefit in concrete ways." (Dynamic System of Power, Privilege and Oppression)

Bigotry: "Bigotry is stronger than prejudice, a more severe mindset and often accompanied by discriminatory behavior. It’s arrogant and mean-spirited, but requires neither systems nor power to engage in." (Debby Irving)

Facism: "Fascism promotes the state and state objectives over and above the interests of society. The rights and wishes of the individual are also important – above the rights of the whole of society. However, this extends only as far as it coincides with the interests of the state. If there is a conflict, then the state will win out every time. . . There is a single party political system in operation and this party will do anything, include exuding force, to make sure that its rules are adhered to. The state is more than a Government, it is a virtually a religion, and must be exalted." (Fascism Explained )

Marginalized/Marginalization: when social structures and social institutions are used to disadvantage those who are not perceived as part of the dominant group. These individuals are often denied equal access to resources and become vulnerable to further exploitation and social exclusion. (University of Central Florida, Social Justice Terminology)

Misogyny: "'Misogyny' often surfaces in  . . . struggles over women's role(s), and you can tell because the control of women becomes personalised, intrusive and often sexualised.” Misogyny has emotions involved with contempt and sometimes violence in it. (Naomi Wolf)

Oppression: Systemic devaluing, undermining, marginalizing, and disadvantaging of certain social identities in contrast to the privileged norm; when some people are denied something of value, while others have ready access. (WPC Glossary from 14th Annual White Privilege Conference Handbook)

Power: Power can be defined as "the ability to decide who will access resources; the capacity to direct or influence the behavior of others, oneself, and/or the course of events" (Power, Privilege, & Oppression) Power is unequally distributed globally and in U.S. society; some individuals or groups wield greater power than others, thereby allowing them greater access and control over resources. Wealth, whiteness, citizenship, patriarchy, heterosexism, and education are a few key social mechanisms through which power operates. (Intergroup Resources, 2012)

Prejudice: A pre-judgment or unjustifiable, and usually negative, attitude of one type of individual or groups toward another group and its members. Such negative attitudes are typically based on unsupported generalizations (or stereotypes) that deny the right of individual members of certain groups to be recognized and treated as individuals with individual characteristics. (A Community Builder's Tool Kit)

Privilege: Unearned social power accorded by the formal and informal institutions of society to ALL members of a dominant group (e.g. white privilege, male privilege, etc.). Privilege is usually invisible to those who have it because we're taught not to see it, but nevertheless it puts them at an advantage over those who do not have it. (Colors of Resistance Archive)

"That idea aligns with those who define racism as prejudice plus power, a common phrase in the field. Combining the concepts of prejudice and power points out the mechanisms by which racism leads to different consequences for different groups. The relationship and behavior of these interdependent elements has allowed racism to recreate itself generation after generation, such that systems that perpetuate racial inequity no longer need racist actors or to explicitly promote racial differences in opportunities, outcomes and consequences to maintain those differences."

Social Justice: "Social Justice is a process, not an outcome, which (1) seeks fair (re)distribution of resources, opportunities, and responsibilities; (2) challenges the roots of oppression and injustice; (3) empowers all people to exercise self-determination and realize their full potential; (4) and builds social solidarity and community capacity for collaborative action."  (Berkeley Social Welfare - Social Justice Symposium)

Xenophobia: 1. fear or hatred of foreigners, people from different cultures, or strangers. 2. fear or dislike of the customs, dress, etc., of people who are culturally different from oneself (Dictionary.com) Racism is a form of xenophobia.